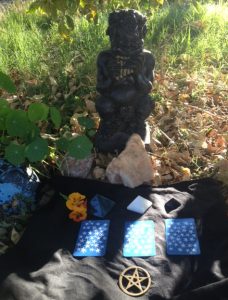 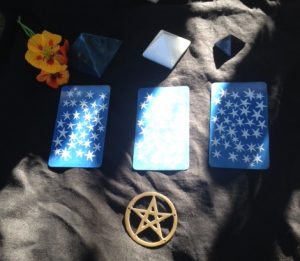 Once you feel ready pick the card that you feel the most drawn to. This week the card deck is the Morgan-Greer deck from U.S. Games Systems, Inc. There are crystals above each card that I am using as markers and will also include in the mini-reading. From left to right the crystals are Green Agate, Selenite, and Shungite. 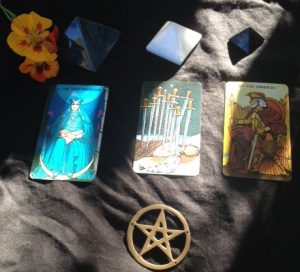 Agate is a type of Chalcedony, a mineral in the Quartz family. This stone has a stabilizing and strengthening influence. This stone is also good for attracting wealth and abundance of all kinds, including the growth and increase of health as well as finances or things. It will aid in attracting friendship too. It is a green stone and is aligned with the heart chakra. In divination this stone suggests a slow, steady increase in that which you need most now. It might be health, money, love, or a promotion. Overall when drawn to this stone you can expect an improvement, it may not be an instant improvement, but it is in the process of becoming more like what you desire.

This is the second Major Arcana, or Trump card in most traditional decks. The element is Water and the ruling planet is the Moon, which rules the sign Cancer(which rules home and family). This card represents the female indwelling presence of the divine, or anima. This card contains suggestions of it’s connection to the Moon with the crescent moon at the Priestess’ feet. This hints at cycles of not only the moon, or the female, but cycles of all kinds are subtly suggested. Water is generally seen as emotions and feelings, and they can ebb and flow like the tides.  Two in numerology represents communications and relationships among other things. With this card the communication could just as likely be from or to your subconscious as another person. This card has keywords like mystery, secrets, silence, stillness, and hidden. They suggest not only the possibility that something is being kept from you, but that perhaps your best course of action is to not “lay all your cards on the table” either. I have seen this card show up in readings representing the ideal, or “perfect” woman. With this in mind it may be time if you have been drawn to this card this week, to trust your inner feminine, your instincts and intuition. (also all keywords for this card) To work on communicating with and building relationship with that part of yourself.

Selenite is a clear transparent form of gypsum, a very soft mineral that is easily scratched and water-sensitive. A common mineral that crystallizes in long, blade-like striations, that can be shaped and tumbled.  It is named after the Moon Goddess Selene.  This stone has the ability to remove unwanted energies from the body. It balances and stabilizes not just the physical body but also emotions.  It is a protective stone that can also awaken your intuition. It can cleanse other crystals as well as you and your environment but it does itself need to be cleansed.  This stone resonates with the Crown Chakra and higher chakras. This is a highly valued stone for spiritual work, and can be used to cut cords, clear energy bodies and clear and align chakras. In divination it suggests that your situation might be unstable or about to change. You might have to separate from something or somebody that isn’t serving your best interests. 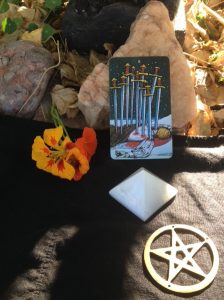 This card is the tenth card in the Minor Arcana suit of swords. It’s element and modality are mutable air, with the energy of the Sun and sign of Gemini. The number ten is often associated with endings and conclusions, but it also contains the number one within it hinting at a whole new beginning.  The image of this card is of a figure face down on the ground with ten swords impaled into the back. Swords are the element of Air, which is thinking and mentality. This might show faulty thinking being the cause of this unexpected ending. It might also point to the need for new thoughts or ways of thinking about things in order to avoid a repeat of this kind of painful experience. Sometimes I have seen this card appear in a reading when not only a new way of thinking were needed, but new methods as well, like trying meditation, or acupuncture(as the image looked at literally might suggest). In any case if you were drawn to this card this week it might be time to carefully examine your thoughts and belief system, then look around you to see what might not be alignment with your highest good and if it is time to clear that away so you can begin a new cycle.

Shungite is a black, lusterous, non-crystalline mineraloid that is more than 98 weight percent  carbon. It gets it’s name from where it was first described Shunga village, in Karelia, Russia. It contains trace amounts of fullerenes, which are powerful anti-oxidants. Used in folk medicine since the early 18th century. Peter the Great set up Russia’s first Spa in Karelia to use the water filtering properties of this mineraloid. He also used it to provide purified water for the Russian Army. It’s black color is protective, and it’s electricity conducting ability make it a great amplifier in meditation and magick.  It is also said to protect from negative energies of all kinds including electronic pollution and E.M.F.s. It is also said to have a connection with the Earth Star Chakra, and ancient Earth energies. It is a very grounding and healing stone that is also used for the base or root Chakra.  In divination Shungite would point to a need to clean and protect yourself and your environment. 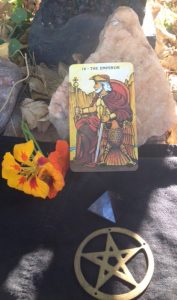 This card is the fourth card in the Major Arcana. Fire is the Emperor’s element,  cardinal modality, and it is ruled by the planet Mars. This card shows an Emperor sitting upon his throne, holding a scepter, or staff with a globe, and a sword. This tarot card represents security, and stability, as well as power and control. It is about control of self, and the world around you. The Emperor is in charge, and makes the rules. This card can represent a father, or father figure, a leader,  a boss, or other authority figure. This card may also represent you if you are in a position of authority, or taking control of some thing, or some aspect of your life. The number four in numerology represents things like foundations,  and security.  Some keywords connected with the Emperor card include law, order, power, authority, rules, boundaries, and promotion. If you have been drawn to this card this week it might be a good idea to set some clear boundaries with others, and focus on building secure foundations for yourself including relationships and your environment.

I hope that you have enjoyed the mini-readings this week, and found them to be useful. If you have any questions about this week’s mini-readings or would like to book a full personal reading please feel free to contact me at april@lodestarphx.com