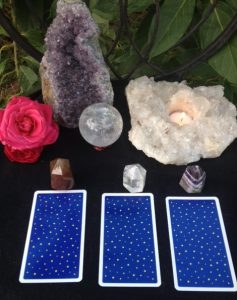 Take a moment and take a deep breath. Get centered, and grounded, then pick a card. By get centered I mean to get calm, focused, and to be present in the moment.  By get grounded I mean to uncross your feet and arms, with feet flat on the floor. It is also beneficial if you can quickly imagine roots shooting down from your root Chakra and feet into the Earth. Allow these roots to anchor you in a supportive way that neutralizes negativity and draws up nurturing Earth energy for stability. Sometimes more than one  breath is needed to feel ready. Often three nice, slow, deep breaths are just right. Do what feels best for you…

Once you feel ready pick the card that you feel the most drawn to. This week the card deck is the Radiant Rider-Waite Tarot published by U.S. Games Systems, Inc.  The crystal points above each card are used as markers and will also be included in the following mini-readings. From left to right the crystals are Rutilated Quartz, Clear Quartz, and Chevron Amethyst. I can’t recall where I acquired the clear quartz point, but the other two I got from Crystal Intuition Arizona 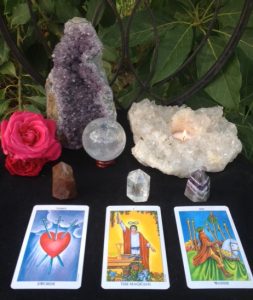 From left to right we have Rutilated Quartz above the Three of Swords, Clear Quartz above the Magician, and Chevron Amethyst above the Six of Wands. Pay attention to what comes up for you upon seeing the card that you were drawn to. Our emotions, feelings and thoughts are all ways that our intuition speak to us and awareness of this is the first step in learning to understand, trust, and rely on our own intuition. Hopefully the mini-reading will provide some guidance or at least food for thought for the week in addition to the general educational information about the crystals and cards.

This variety of Quartz contains golden colored strands, or some call them needles of Rutile, a mineral made of titanium dioxide.  It is found all over the world, as is regular quartz.  It is said to clear and balance all of the Chakras, the golden color of the Rutile may work especially well with the Solar Plexus Chakra. It is used in meditation, for psychic work, in grids, also for healing, and even for magickal work.  In divination this crystal may suggest that you meditate on an area in life that you may feel stuck, diving deeply into this area now might bring the answers that have thus far eluded you. Using the energy of Rutilated Quartz right now to assist you, you can see the step that needs to be taken to get things moving. 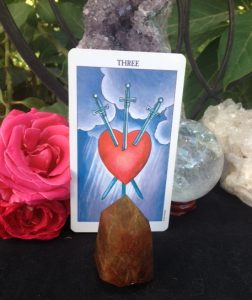 This card is the third card in the Minor Arcana suit of Swords. Astrologically it carries the energy of Saturn in Libra with the modality and element of cardinal air. This card image is one of the most striking in the tarot deck as three swords pierce a heart with storm clouds raining down in the background. The keywords and concepts for this card include that of severe distress, the heart tried by pain, painful advancement, upheaval, negative or hurtful thinking and communications, despair, and depression. While there is some consensus around this card pointing to pain, it is usually caused by and can be mitigated by our thinking, and perception. Swords are thoughts, thinking, communication, learning, and discernment. Three is a number for growth, and creativity, this can be good or bad. It is good if we are growing thoughts that increase our happiness, not so good if we are in a depressive spiral with our thoughts. If you have been drawn to this card this week it is likely that you will have some disappointment to work through. What you learn from it, and how you decide to move past it are going to be important. It may do well to remember this week that there is no failure but only lessons. Like Thomas Edison who is credited with having said about the light bulb before getting one to work successfully “I have not failed, I’ve just found 10,000 ways that won’t work”.

Clear quartz has the ability to focus, amplify, store, and transform energy. It is used in technology in watches, radio transmitters and receivers, microphones,  ultra sound devices, memory chips in computers, and other electronic circuitry. The phenomenon of piezoelectricity, the release of electric charge under the application of mechanical stress, occurs in all noncentrosymmetric materials.  Pyroelctricity, the release of charge due to a material’s change of temperature occurs in all materials that belong to polar crystal symmetry class. Not all noncentrosymmetric classes are polar, and not all piezoelectric crystals are pyroelectric. All pyroelectric crystals are piezoelectric though.

These properties of energy amplification, programmability, and memory make quartz crystals useful for healing, meditation, communicating with guides, expanding consciousness, or really almost any other purpose you could imagine. It is good at amplifying the energies of other stones, or groups of stones like in grids. It is a wonderful material for wands and staffs, and everyone has seen or heard of a crystal ball for crystal gazing. In divination it can point to new energies, new beginnings, a need to make a decision and act quickly upon it, and dreaming of clear quartz can mean freedom from enemies. 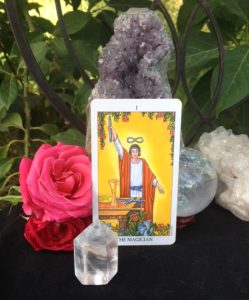 This card is numbered one in the Major Arcana. It is associated with the planet Mercury. The image on this card is of a Magician at his altar with his right hand overhead and left hand pointing to the Earth below, a lemniscate symbol (also known as an infinity symbol) above his head. His altar holds all the elemental tools he needs to make magick happen. Some keywords for this card are talent, skill, will, power, self-confidence, communication, channeling, and cunning. The number one is associated with leadership, pioneering, singularity, and new  beginnings. Mercury in myth was the messenger of the Gods, he was also a trickster. Mercury rules Gemini, the sign of communication. If this was the card you were drawn to this week it may represent yourself or someone else in your life. If it represents you then you should feel confident in using your will to create new circumstances that you want in your life. This could be anything from writing that book, or starting a business to simply rearranging your kitchen cabinets. If however, this represents someone else in your life you may want to be aware of who is around you and what they are up to. It is much harder for someone to misdirect your attention when you are already aware of what they are trying to do. In either case trust your own instincts and abilities to create the safe space you need to to thrive in.

Amethyst is a variety of quartz made up of silicone dioxide, it gets its color from iron, and aluminum deposits as well as natural irradiation. Found in places like Brazil, Bolivia, Mexico, Africa, Canada, Russia, U.S.A. and Europe. It has a long history of use by humans. For some it was merely decorative, but the ancient Greeks were known to use it as  protection against drunkenness. It has also been known for it’s healing and protective properties. It resonates with the Crown Chakra. The Chevron Amethyst is said to be powerfully stimulating to the Third Eye Chakra, filtering information from the Crown Chakra into visions that are more easily interpreted. It is also excellent at dissipating and dispelling negative energies, so it is helpful for journeying and trance work. This stone is also know to assist creative endeavors of all kinds. In divination this stone shows that you may enjoy feeling good and receiving rewards without going overboard, or to excess. Dreaming of Amethyst is protective and signals freedom from harm and negativity. 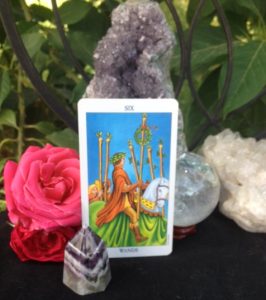 This card is the sixth card in the Minor Arcana suit of Wands. This card carries the energy of the planet Jupiter, and the sign Leo. Its modality is fixed and its element is fire.  The number six is considered a destiny number, a number that represents beauty, harmony, and balance. The suit of Wands in Tarot are said to represent primal energy, will, intuition, spirituality, inspiration, ambition, and expansion, as well as enterprise and distinction. The image on the card depicts a man on horseback with a laurel wreath not only on his head but also on the staff he holds. This card is considered a card of victory and success. Keywords include completion, success, reward, recognition, good news, and triumph. While the victory may be an internal one, it usually is one that will be recognized by those around you. You have summoned your inner fire of will and inspiration to win the day. The message of this card is that even if challenges are apparent you will overcome them. So if you were drawn to this card this week expect some sort of victory. It might be finishing a tough assignment at work, or quitting smoking, maybe even a lottery win. Whatever it is that you win this week it will be due to your work to keep yourself energetically aligned with this successful vibration.

I hope that you have found these mini-readings helpful this week. If you have any questions about them, or would like to book a full  personal reading, please feel free to email me at april@lodestarphx.com.