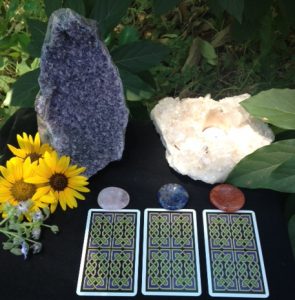 Take a moment and take a deep breath. Get centered, and grounded, then pick a card. By get centered I mean to get calm, focused, and to be present in the moment.  By get grounded I mean to uncross your feet and arms, with feet flat on the floor. It is also beneficial if you can quickly imagine roots shooting down from your Root Chakra and feet into the Earth. Allow these roots to anchor you in a supportive way that neutralizes negativity, draining it away and draws up nurturing Earth energy for stability. Sometimes more than one  breath is needed to feel ready. Often three nice, slow, deep breaths are just right. Do what feels best for you…

When you feel ready pick the card that you are the most drawn to. The deck this week is the Connolly Tarot by Peter Paul Connolly and Eileen Connolly, published by U.S. Games Systems, Inc. The crystals above each card will also be included in the following mini-readings, from left to right they are Rose Quartz, Sodalite, and Red Jasper.

From left to right we have Rose Quartz above Judgement, Sodalite above the Five of Pentacles, and Red Jasper above the Ten of Cups. Pay attention to your initial reaction upon seeing your card, then compare this to how you feel after the mini-reading. Awareness is the first step in developing your own intuition. Did your feelings or thoughts change after you read the information about the card that you picked? Did the mini-reading resonate for you, or did you find another meaning for yourself within the information about the card that made more sense?

Rose quartz is called the heart stone, it corresponds to the heart chakra. Rose Quartz is a silicone dioxide crystal that is a common variety of Quartz found all around the world. This stone is also said to inspire love and beauty in all forms. Used for developing or attracting loving relationships with others, and even the self. In divination this stone is about forgiving yourself, and not allowing others to lay blame on you that you do not deserve. This stone also serves to help nurture a positive self-image, release emotional wounds, and learn to joyfully give and receive love. 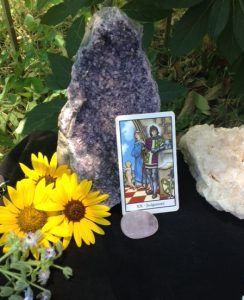 While in many decks this card would be associated with the planets Saturn or Pluto and the element of fire Eileen Connolly has it assigned to the Moon.  According to Connolly Judgement suggests self-judgement, rebirth, a renewal of the inner you. The child is the higher consciousness already emerging into the new existence, pointing the way, naked and void of all previous thought patterns. The female consciousness is dressed in blue representing spirituality, with a scarf around her head and neck representing purity, she no longer wears shoes. The male conscious level is the process of reality. He is looking at the book of life-his life. He is in the process of self-judgement, self-analysis, it has been his greatest battle. The key: Wonderful things are starting to happen. You have the ability to forge ahead and see what the future holds. Break away from conventional thinking and face life realistically.

Sodalite is a feldspathoid with deep blue color that is intermingled with white calcite (though it sometimes can form in colors like grey, pink, green, or yellow). It is named for it’s sodium content, it is a chloric sodium aluminum silicate. First discovered in Greenland, with vast deposits found later in Ontario, Canada. Sodalite has a calm, stabilizing energy that is useful for those prone to anxiety or panic attacks.  It clears the way to allow movement from over-emotional to rational. It is good for creativity, inspiration, and focus. As a blue stone it is associated with the throat chakra, and the third eye chakra (Ajna) these chakras have dominion over communication, expression, as well as intuition and inspiration. In divination Sodalite shows a need to say something but also a need to be tactful and use the right words to say it. 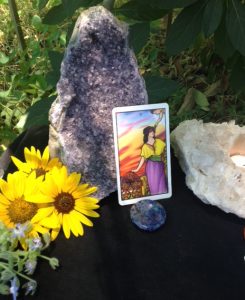 Many decks would associate this card astrologically with Mercury in Taurus and fixed earth as the modality and element. Eileen Connolly assigns this card astrologically to Jupiter/ Aquarius/Gemini/Uranus/Saturn/Mercury. The card image shows a blindfolded woman steadying herself on a garden gate composed of five pentacles. She is dressed in a purple skirt, the color of royalty, spirituality and healing. She also has on a yellow embroidered shirt and a green belt, yellow is often associated with the element air and gold is a hue of yellow, the green belt may be associated with earth and growing things as well as the color of money. A child or Cherub (the higher self) is removing a red blindfold from the woman (the feminine consciousness) this may represent a change from being blinded by passions to starting to see clearly. Eileen Connolly’s key: Take the time to review what is happening in your life and what  you want. Don’t be afraid. Listen to your higher self and open the gate of opportunity.

Red Jasper. a stone of empowerment and strength. It is a microcrystalline variety of quartz, with a high iron content found all over the world. Said to be protective crystals of both the physical and spiritual realms. A stone of endurance and stamina, that activates the root chakra. It helps with connecting to Earth’s grounding energies and alleviates stress. A good stone for assisting with dream work, astral travel, and divination. It’s meaning in divination is a need to create and use boundaries with those who might be taking advantage of you, or trying to manipulate you. 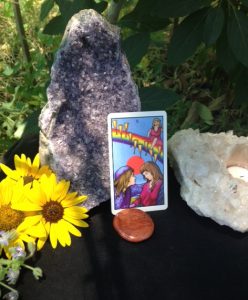 Many decks may see this card as associated with Mars in Pisces and the modality and element of mutable water. Eileen Connolly assigns this card astrologically with Uranus/Scorpio/Pluto/Mars. The image of this card has a couple in the foreground that represent the male and female consciousnesses, behind them is a rainbow with ten cups and what appears to be a youth that may represent the higher self. Key: You are experiencing the happiness you desire. Realization of personal hopes and dreams.

I hope that you have found the Tarot Reveal this week to be helpful. If you would like to book a full personal reading please feel free to contact me at april@lodestarphx.com