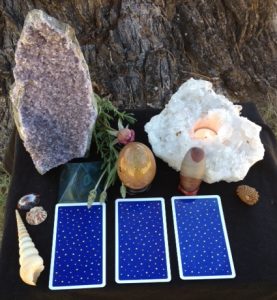 When you feel ready pick the card that you are most drawn to. From left to right there are different crystals above the cards. I will use these as markers for each card, and include them in the mini-reading. From Left to right we have a Green Agate Pyramid, an Unakite egg, and a Shiva Lingam. This week I am using the Radiant Rider-Waite (Smith) tarot deck from U.S. Games Systems, Inc. 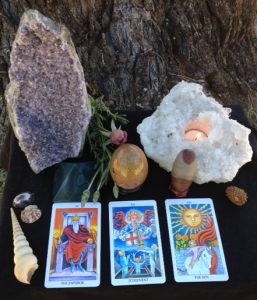 Starting on the left we have the Green agate pyramid above the Emperor card, in the center is the Unakite egg above the Judgement card, and on the right is the Shiva Lingam above the Sun card. I find it interesting that all the cards are from the Major Arcana this week. The energy in general this week is certainly strong as we have just had a New Moon in Aquarius, along with the Sun of course but also joined by Mercury and Lilith. Also all the planets are direct with no retrogrades this month. This suggests a time for things to move forward.

Agate is a type of Chalcedony, a mineral in the Quartz family. This stone has a stabilizing and strengthening influence. This stone is also good for attracting wealth and abundance of all kinds, including the growth and increase of health as well as finances or things. It will aid in attracting friendship too. It is a green stone and is aligned with the heart chakra. In divination this stone suggests a slow, steady increase in that which you need most now. It might be health, money, love, or a promotion. Overall when drawn to this stone you can expect an improvement, it may not be an instant improvement, but it is in the process of becoming more like what you desire. 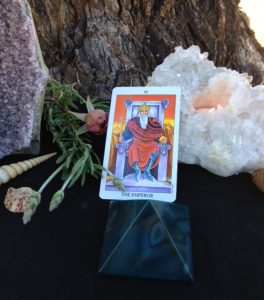 This card is the fourth card in the Major Arcana. Fire is the Emperor’s element,  cardinal modality, and it is ruled by the planet Mars. This card shows an Emperor sitting upon his throne, holding a scepter, and a globe. This tarot card represents security, and stability, as well as power and control. It is about control of self, and the world around you. The Emperor is in charge, and makes the rules. This card can represent a father, or father figure, a leader,  a boss, or other authority figure. This card may also represent you if you are in a position of authority, or taking control of some thing, or some aspect of your life. If you are drawn to this card this week then it is time to make decisions, and take actions that will lead to the outcomes that you desire. Realize that a period of hard work, control, and persistence is needed to create, maintain, and then grow your desire into something even better.

Unakite Jasper is also called Epidote. It is an amalgamation of Red Jasper, Pink Feldspar, and Green Epidote. It forms as a dense mass of opaque granite rock that ranges in shades of greens, pinks, and and light reds or peach colors. Named for the Unaka Mountains of Tennessee, and North Carolina, in the United states where it was first discovered. It is also found around the Great Lakes, and Zimbabwe, and Switzerland. It is said to be a healing crystal for both the heart and the mind, and balances the emotional body. Due to this it helps in attracting healthy relationships. It is used in spells for love, and fertility. This crystal is supportive of relationships and business. It also helps to release bad habits, and negative patterns you might be stuck in. It is associated with the heart chakra. It is good for spiritual studies, and for rebirthing, and past life healing as well. In divination it points to learning from the past, or overcoming it, and moving forward. 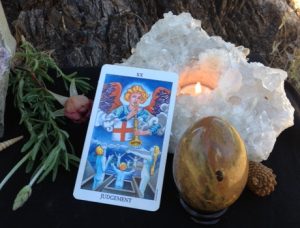 This Major Arcana card is number twenty and it is ruled by Pluto and its element is fire.  The image of an Angel blowing a trumpet and grey figures emerging from coffins impresses the idea of being called to awaken, or start living life in a new way. Keywords include Reincarnation, transition, decision making, awakening, renewal, and even success is implied. If you were drawn to this card this week it suggests that it is a time to make some big changes in your life. The Universe is calling you to live your life in a new way, give up old habits and beliefs that are holding you back. Embrace the new ideas that are calling to you. This card shows that now is the time to transition from your old life and into your new way of being.

The Shiva Lingam is an egg shaped stone made of Jasper. These stones are found in the Narmada River in Onkar Mandhata India. No two stones are alike. The shape is phallic and said to represent masculine energy, while the pattern on the stones is said to represent female energy. It symbolizes the God Shiva’s union with his consort Kali, activating the root and sacral chakras. The Shiva Lingam raises and controls kundalini energy, assisting with spiritual evolution through tantra or sex magic. It also represents balance, harmony, and aiding in the union of opposites. In divination it points to finding your balance so that the perfect balanced match or partnership can be experienced. 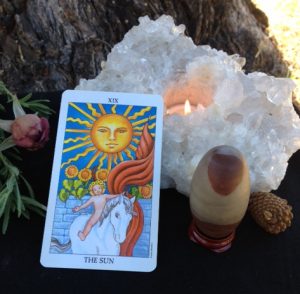 This Major Arcana, or Trump card is number nineteen, its element is fire and rules itself. The Sun is the central source of light and energy, the primary symbol of the ego, and the full achievement of personal potential. The image on this card is of an infant on the back of a white horse with the Sun and sunflowers behind him. The keywords include joy, happiness, vitality, enlightenment, success, and marriage. This card represents happiness, joy, harmony, and good luck and fortune. It is a time of synchronicity when your inner being is aligned to the same frequency as all the good people, things, and circumstances that you might wish to encounter. If there is a question of whether or not you can do something, or if you should, then this card is a resounding YES. If you were drawn to this card this week remember that it is like the Hermetic axiom of As above, so below, as within, so without. You, and your state of mind, feelings, and emotions is what is creating or allowing(however you want to view it) the good fortune to happen.

I hope that you have found this mini-reading helpful or valuable, if you have any questions or would like to order a full personal reading contact me at:  april@lodestarphx.com