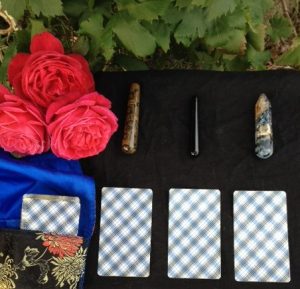 Take a moment and take a deep breath. Get centered, and grounded, then pick a card. By get centered I mean to get calm, focused, and to be present in the moment.  By get grounded I mean to uncross your feet and arms, with feet flat on the floor. It is also beneficial if you can quickly imagine roots shooting down from your root Chakra and feet into the Earth. Allow these roots to anchor you in a supportive way that neutralizes negativity and draws up nurturing Earth energy for stability. Sometimes more than one  breath is needed to feel ready. Often three nice, slow, deep breaths are just right. Do what feels best for you…

When you feel ready pick the card that you feel the most drawn to. There are crystal wands above each of the cards used as markers and they will be included in the mini-readings that follow. The crystals from left to right are Stromatolite, Onyx, and Pietersite.  This week the deck is the Rider Waite-Smith deck published by U.S. Games Systems, Inc. 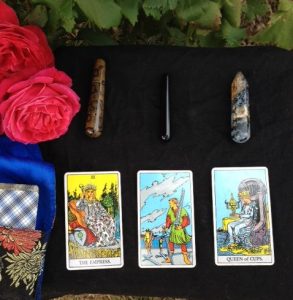 From left to right we have Stromatolite above The Empress, Onyx above the Five of Swords, and Pietersite above the Queen of Cups. Pay attention to your first impression when you see the card you were drawn to. Compare that first impression to your thoughts and feelings after the mini-readings below. Learning to pay attention to our thoughts, feelings and emotions is the first step in learning how our intuition works in speaking to us, and this can help us to better understand, use, and strengthen our own intuition.

Stromatolite is an excellent stone for transformation, and evolutionary change. It assists in removing or changing deeply ingrained blockages, patterns and programs. It is also known to encourage new patterns, and flexible thinking. Stromatolite is created from fossilized algae that were the predominant form of life on Earth for more than two billion years, and are said to have created the oxygen on our planet. This stone is also said to be helpful for reading the Akashic Records, and delving into past lives through techniques like past life regression. This stone has a deeply earthy energy that works well with the Root and Solar Plexus Chakras. In divination this stone points to a time when change is called for, you may want to initiate these changes before they are brought about from outside of you. 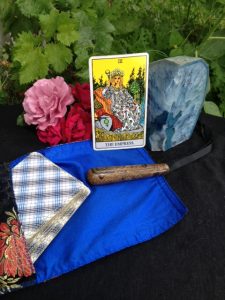 This card is the third card in the Major Arcana. It has an astrological correspondence with the planet Venus. In mythology Venus is a Goddess of beauty and love. The card holds the vibration of the number three, in numerology threes stand for creativity, artistic leanings, growth, team-work, self-expression, and playfulness. The image of this card is that of a pregnant woman seated in a lush meadow with trees and a flowing water behind her, a heart shaped shield with the symbol of Venus on it is at her feet. There is the suggestion of the Great Mother, an Earth Goddess, or possibly Mother Earth herself. Some keywords associated with this card include fertility, motherhood, creativity, self- expression, love, relationships, emotions, intuition, and hopes and dreams. If you have been drawn to this card this week then it is likely that growth will occur for you, if you have been waiting to take steps on an artistic project now is a time to do so. In relationships there will be harmony and balance this week, which in and of itself is helpful to making headway in areas where you might have felt stuck.

Onyx is a variety of silicate mineral chalcedony. Black onyx stimulates both the Earthstar and Root Chakras. Onyx is an ancient stone used for many magickal and mundane purposes by many cultures throughout history. Black Onyx is a powerful stone of protection for the mind and body. It is useful as a sort of shield against harmful energies, often used by those who do energy work like psychics, and mediums. It has a very earthy, grounding energy to it that might be depressing for some if used for too long.  Helps develop emotional and physical strength and stamina. It is helpful in times of stress, confusion, and grief. With time and thoughtful workings this stone can help lead one to mastery of one’s self. In divination Onyx means that happiness and good fortune are just around the corner. To dream of Onyx is said to mean that you will have a happy marriage. 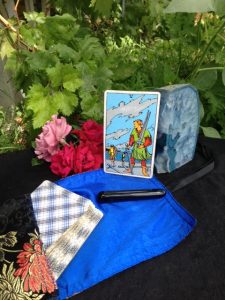 This card is the fifth card in the Minor Arcana suit of Swords. It has an astrological correspondence with Venus in Aquarius. This card is of the Air element, air is a representation of thoughts, and communications. The number five is a number that shows change,  movement, and transmutation. The air signs of Aquarius, Libra, and Gemini could figure into the associations for this card. The card itself shows several dejected figures and one figure in the foreground. There are stormy skies that might further suggest battles, or unrest of sorts. The scene appears like a battle has been won, but the victory may or may not have been worth it. If you have chosen this card then it is likely that there has been a fight of ideas going on for you. It is also a possibility that the new ideas that win will cause you to make some changes. Making changes is not always easy, but once we are far enough along to see the results of them it is like the difference between night and day. Also remember that often when making big changes we need to let go of what is not working and even though this leads to better things it can hurt or be unsettling to do so. So allow yourself to grieve what you will be getting rid of even if it is just an idea, or belief. When you are done the clouds will clear and the Sun will shine again.

Pietersite is known as the Tempest Stone. It can clear the emotional air like a thunderstorm is known to do, leaving the aura and emotions feeling calm and renewed. It grounds physical energy centers to the etheric realm instead of to the Earth. It increases intuition, the use of the will, and the focus of one’s aim in life. It is also a powerful protective stone, especially against the elements, storms in particular. This crystal is also good for boosting confidence, creativity, and supports overcoming addictions. It is a blend of Tiger’s eye, Hawks eye, and Jasper with incredible chatoyancy (shimmery shine) that makes it seem to swirl like a storm brewing. It is a fairly recent discovery made by Sid Pieters in Windhoek, Namibia. In divination this crystal means that you will see things in a new way, usually after something is brought to light. 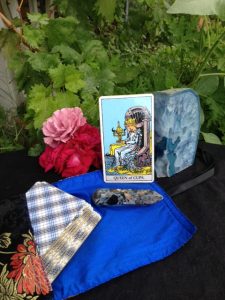 This card is a court card in the Cups suit of the Minor Arcana. This Queen is known as Water in the suit of Water. The astrological affinity is Cardinal Water. The image of this card is that of a Queen sitting on her throne at the water’s edge gazing into the chalice she holds. Some keywords are loving, sensitive, motherly, compassionate, intuitive, dreamer, artistic, creative, emotional depth, and protective. Court cards can often show up as people in your life, this queen may represent either yourself or someone else who is in your life. If it is you, you may be in a position to be a caretaker or use your intuition to assist another, if this is someone else in your life trust them to provide you with the assistance you need right now with their compassionate counsel.

I hope that this mini-reading has been helpful for you this week. If you have any questions about it, or would like to book a full personalized reading then please feel free to contact me at april@lodestarphx.com