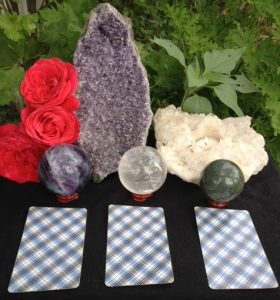 Take a moment and take a deep breath. Get centered, and grounded, then pick a card. By get centered I mean to get calm, focused, and to be present in the moment.  By get grounded I mean to uncross your feet and arms, with feet flat on the floor. It is also beneficial if you can quickly imagine roots shooting down from your root Chakra and feet into the Earth. Allow these roots to anchor you in a supportive way that neutralizes negativity and draws up nurturing Earth energy for stability. Sometimes more than one l breath is needed to feel ready. Often three nice, slow, deep breaths are just right. Do what feels best for you…

When you are ready pick the card that you feel the most drawn to. The Crystal spheres above each card are used as markers and will also be included in the following mini-readings. From left to right we have Fluorite, Quartz, and  Labradorite. The card deck this week is the Rider Waite (Smith) deck published by U.S. Games Systems, Inc.

From left to right we have the Fluorite above the Knight of Wands, the Quartz above the Two of Pentacles, and the Labradorite above the Ten of Swords. Notice your initial reactions to the card you were drawn to. Was it what you expected? What emotions, feeling, and thoughts does it bring up for you? Check this against your reactions after the mini-reading for your card and see if there are any differences or not for you. Learning how your own intuition speaks to you and how to understand it starts with your awareness.

Fluorite is the mineral form of calcium fluoride, it belongs to the halide minerals. It is a widely occurring mineral with deposits found worldwide. Industrially it is used as flux for smelting, and in the production of some glasses and enamels. Fluorite is a very protective stone, good for grounding and harmonizing spiritual energy. It connects the mind to universal consciousness, and helps develop links with spirit. It helps bring intuitive insights into the physical plane. Fluorite balances mental and physical energies and can clear negative energies from the aura. It is said to enhance mental abilities and has been called the “genius stone”. It stimulates the electrical charge in the brain and increases prana energy. This stone works well with the upper Chakras. It needs to be cleared often as it is always working to absorb negativity from its environment. In divination this crystal is said to assist in making decisions that are practical, but also ethical and do not go against your principles. 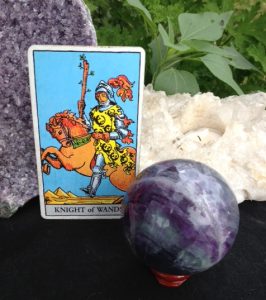 This card is a court card in the Minor Arcana. It is known as Air in the Suit of Fire, and it has an astrological affinity with the Mutable Fire sign of Sagittarius. The image on the card is of a young knight rearing up on his horse in fiery appearing attire, holding a wand or staff. If this card doesn’t represent an actual young man in your life then it may concern all types of dynamic communication. Movement, travel, active, issue oriented and fighting for a cause are all keywords associated with this card. In divination it may point to an actual person of this nature that you encounter, or it may suggest travel or even a move. If you have been waiting to take action on something this is a sign to take steps to make things happen.

Clear quartz has the ability to focus, amplify, store, and transform energy. It is used in technology in watches, radio transmitters and receivers, microphones,  ultra sound devices, memory chips in computers, and other electronic circuitry. The phenomenon of piezoelectricity, the release of electric charge under the application of mechanical stress, occurs in all noncentrosymmetric materials.  Pyroelctricity, the release of charge due to a material’s change of temperature occurs in all materials that belong to polar crystal symmetry class. Not all noncentrosymmetric classes are polar, and not all piezoelectric crystals are pyroelectric. All pyroelectric crystals are piezoelectric though.

These properties of energy amplification, programmability, and memory make quartz crystals useful for healing, meditation, communicating with guides, expanding consciousness, or really almost any other purpose you could imagine. It is good at amplifying the energies of other stones, or groups of stones like in grids. It is a wonderful material for wands and staffs, and everyone has seen or heard of a crystal ball for crystal gazing. In divination it can point to new energies, new beginnings, a need to make a decision and act quickly upon it, and dreaming of clear quartz can mean freedom from enemies. 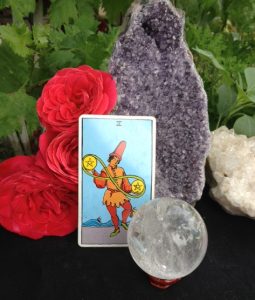 This card is the second card in the Minor Arcana suit of Pentacles. Astrologically it carries the energy of Jupiter in Capricorn with modality and element of cardinal earth. The image shows a figure in a tall hat juggling two pentacles before a choppy sea. The figure may be  a jester or a showman. Even though there are only two objects being juggled the pattern is that of the lemiscate (also known as the infinity symbol). In numerology twos represent duality, choices, communications, partnerships, and a wide and varied number of concepts that come in pairs like male and female, yin and yang or day and night. Some keywords for this card include balance, harmony, equilibrium, flux, rhythm (especially between things like the spiritual and material for example), polarities, opposites, and opposite ends of a spectrum. If you are drawn to this card this week you may find yourself trying to find balance amidst change. There is likely to be a lot of activity involved, as in trying to juggle several situations at once. Often this card shows this as a phase, that’s the good news. Once you have the complexities in hand then it will likely change again. Think of it as a dance you will master, then you will learn another more difficult dance. It might seem hard at times, but with the right attitude it can also be fun(or at least satisfying that you are mastering your dance of life).

Labradorite is a member of the Feldspar family and is known for its Labradorescence, a remarkable play of flashing colors. It was discovered in Labrador Canada by Moravian Missionaries in 1770. There are other varieties like Golden Labradorite, and Spectrolite, and intense variety discovered in Finland in the 1940s that displays the entire color spectrum. It is said to be a powerfully protective stone shielding and strengthening the aura, which allows for exploring the astral realm and safely experiencing psychic phenomenon. Labradorite radiates a predominately blue energy that stimulates the Throat Chakra, and its ability to flash the other colors assist in unifying all the Chakras and allowing for expression through the Throat Chakra. In divination this stone suggests that while you may have to make the best of a bad situation, that this is temporary and things will soon go your way. 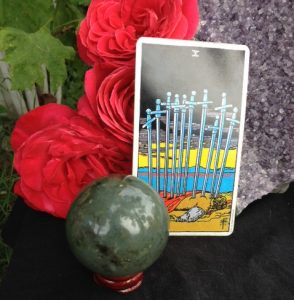 This card is the tenth card in the Minor Arcana suit of swords. It’s element and modality are mutable air, with the energy of the Sun and sign of Gemini. The number ten is often associated with endings and conclusions, but it also contains the number one within it hinting at a whole new beginning.  The image of this card is of a figure face down on the ground with ten swords impaled into the back. Swords are the element of Air, which is thinking and mentality. This might show faulty thinking being the cause of this unexpected ending. It might also point to the need for new thoughts or ways of thinking about things in order to avoid a repeat of this kind of painful experience. Sometimes I have seen this card appear in a reading when not only a new way of thinking were needed, but new methods as well, like trying meditation, or acupuncture(as the image looked at literally might suggest). In any case if you were drawn to this card this week it might be time to carefully examine your thoughts and belief system, then look around you to see what might not be in alignment with your highest good and if it is time to clear that away so you can begin a new cycle.

I hope that you have found these mini-readings helpful this week. If you have any questions about them, or would like to book a full personalized reading please feel free to contact me at april@lodestarphx.com